The festival is spread across 3 evenings with 2 consecutive screening programmes starting at 6.15pm and 8.15pm, respectively.

The four main screenings are competitive and there will be awards in several categories including:

* All screening programmes on Monday and Tuesday are going to be followed by Q&A with the filmmakers. 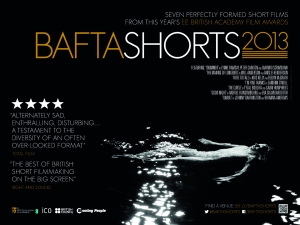 Here to Fall
Dir: Kris Kelly | Ireland | UK | 2012 | 6mins
When a girl receives a call from her father she is set on a frantic journey through a chaotic world.

The Curse
Dir: Fyzal Boulifa | UK | Morocco | 2012 | 16mins
Fatine has ventured far from the village to meet her older lover. When she is caught by a small boy, all she wants to do is go home.

Tumult
Dir: Johnny Barrington | UK | 2011 | 13mins
A tribe of Norse warriors traipse across a barren land after battle. Bloodied and wounded, their chief is near death. He is about to hand over power to his son when an army of a completely different kind descends upon them.

The Making of Longbird
Dir: Will Anderson | UK | 2011 | 15mins
A behind-the-scenes look at an animator as he struggles with his character.

Good Night
Dir: Muriel d’Ansembourg |UK | 2012 | 28mins
Two teenage girls find themselves pushed to extremes on the streets of London when the boundaries between innocent play and dangerous seduction start to blur.

If you can’t make any other screenings in the festival, make sure you get down on WED for the BAFTA Shorts at 6.15 following which at 8.15pm we will have our very own Winning Award Ceremony followed by screening of all the winning films in this year’s Kino Exposed Festival.

One thought on “kino exposed official selection and programme”

Kinofilm has not received any funding since the 11th edition in 2010. However, we are determed to produce a Short Film Festival (our 12th edition) in 2014. We are currently working on securing sponsorship for the festival and anyone can help by making a donation via paypal or your credit card. All you have to do is click on the donation button below and make a donation to our Festival paypal account. You can decide the amount, its entirely up to you. Remember, every pound makes a difference and will bring us closer to our target for the 2014 Festival. Thanks so much in advance for your support.

Kinofilm is the trade name for Manchester International Film Festival, a not-for-profit company, limited by guarantee. Kinofilm Festival was founded in 1995 as an annual Festival taking place until 2006. Following loss of funding due to government and local authority cut-backs the festival now takes place every three years, Our last major Festival was in 2010 with our next European Short Film Festival planned for Feb 2014.

We also produce an annual student short film festival called Kino Exposed and our twice monthly short film nights known as Kino Shorts take place in Manchester and Salford. We are available to present short film nights, pop-up cinema screenings or programme collaborations with other festivals. Please browse the pages on our current events or our services and contact us for further information.